A Musical Journey between Worlds

Original songs and spiritual chants to celebrate the joy of life.

Mirabai Ceiba is a musical project created by Angelika Baumbach from Mexico / U.S. (vocal and harp) and Markus Sieber from Germany (vocal and guitar). They perform a compilation of original songs in Spanish and English as well as newly arranged chants from different traditions of the world and Kundalini Yoga Mantras.
The name Mirabai Ceiba expresses the influences of both India and Native Latin America. The Ceiba is the sacred tree of Latin America, where these trees are never cut but are allowed to grow very tall.
"We wish our music could be like that kind of tree, with roots deep in the Mother Earth and branches extending wide into Father Sky. Mirabai is for us the wandering, the devotion, the inspiration in all the different aspects of divinity."

daughter of a Mexican mother and a German father, was born in 1977 in Tucson, Arizona and grew up in a little village near Mexico City. As a child, she was influenced by the music and singing of Mantras in the tradition of Kundalini Yoga and Sikh Dharma. When she was 15, she started singing with the Mexican world music group "Cielo y Tierra", which released an album in 1992 (Warner Bros. Music). Influenced by the music scene in Tepoztlan, a little Mexican town known for its musicians and artists, she learned how to play the harp and recorded and produced her first solo album. On a European tour she met the actor and musician Markus Sieber at the Fringe Music and Theater Festival in Edinburgh in 2001, and Mirabai Ceiba was born.

was born in 1974 and grew up in East Germany. After the union of Germany in 1990, he founded the rock band Ponyboy Curtis and performed concerts in Germany, Poland and Russia. When the group split up, he studied acting in Berlin and St. Petersburg, leading him to several parts in German theater and movies. When he met Angelika, he rediscovered music in a new way.

The mixture between different cultures and the mutual sharing of a vision and a path opened up a new musical dimension for them. Since then Angelika and Markus have traveled together as Mirabai Ceiba giving concerts and workshops ("Sound and Self", "Song of the Earth") in Europe, USA and Latin America. They live with their daughter near Mexico City. 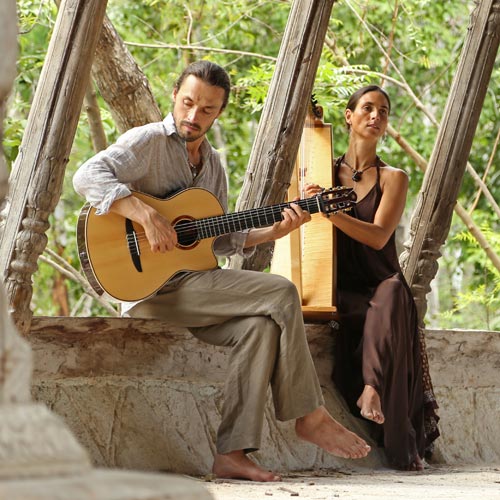 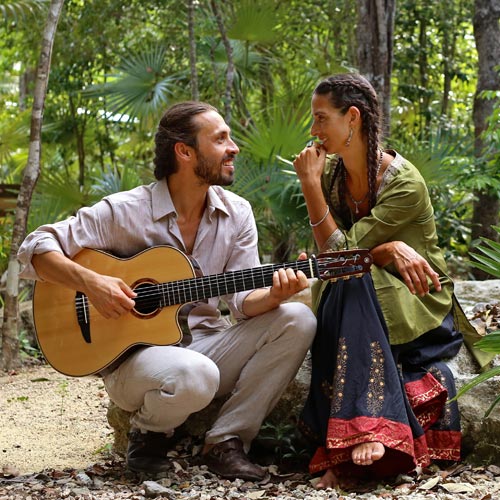